Why the Right to Peacefully Protest Trumps (almost) Everything

“Find out just what any people will quietly submit to and you have found out the exact measure of injustice and wrong which will be imposed upon them, and these will continue till they are resisted…”

Once in a generation comes an injustice so great that it unites decent people across cultures and continents. Remaining silent becomes an act of complicity. The only decision to be made is the extent to which the injustice is protested. The Black Lives Matter movement has sparked demonstrations in every major American city, and across the world. In London and 8 other UK cities, peaceful demonstrations have taken place and more are planned.

Protestors in the USA have already achieved what was unthinkable a few months ago – many town halls and Governors are discussing “defunding” the police, with a view to returning more policing functions to community based activities. It has become a major topic of discussion on American TV and will become an election issue for Donald Trump.

A moral difficulty arises when a demonstrator risks the spread of Covid-19 and therefore trespasses on the right of others to health and life.

A legal difficulty arises when attendance at a mass demonstration is in breach of Regulation 7 of the Health Protection (Coronavirus) Regulations 2020, which prohibits public gatherings of more than 6 people. Does this Regulation, written in haste, but designed to protect lives, trump deeply ingrained rights of expression and association, enshrined in the Human Rights Act 1998?

The problem with the rights in Article 10 and Article 11 of the European Convention – freedom of expression and freedom of peaceful assembly – is that they come with an important caveat. Governments can limit such freedoms in the interests of national security, public safety or the protection of public health. It is a caveat that is often used by the State, but only sometimes correctly.

The Coronavirus Regulations 2020 were enacted for reasons exactly matching the caveat in the Convention rights – to protect health and public safety, and for national security reasons in an unprecedented crisis.

Public attitude to the Regulations and their enforcement has been ambivalent for good reason. Dominic Cummings’ risible “Barnard Castle” defence and the Prime Minister’s lamentable defence of his chief strategist have led to a “one rule for them and another rule for us” feeling in the public mind. That the Police and Prosecutors have made numerous errors in the application of the new law, has also reduced regard for the Regulations. Add to this mix the inexplicably different rules on gatherings, as between Scotland, Wales and England and the Government’s loosening of the social distancing rules even though it had not achieved its own benchmarks – and one has a set of Regulations in which the public have little confidence.

The law is crystal clear: the Black Lives Matter marches are in breach of Regulation 7 of the 2020 Regulations. The marchers will know this and have decided to take the risks attendant to breaching the law. The Home Secretary and the Metropolitan Police Commissioner have both urged protestors not to take to the streets, emphasising the health risks. The Police have resisted the temptation to make mass arrests or hand out instant fines to thousands of protestors who are in clear breach of the 2020 Regulation. There is a reason for this.

Politicians and experienced Police Officers are well aware of the truism: not every law that can be enforced should be enforced. They have sensed that BLM is an important movement with a momentum that cannot be stopped with exhortations or arrests. It has caught the public imagination in every continent. It is a movement about an Article 2 right – the most fundamental right of all : “everyone’s right to life shall be protected by law”. It has a powerful moral underpinning.

Peaceful demonstrators who march in breach of the law know that there are likely to be consequences. Martin Luther King knew this. Nelson Mandela was often arrested and suffered incarceration for many years. Mahatma Gandhi whose non-violent movement helped to topple the British Raj, expected to be arrested and imprisoned for his breaches of the law. These were political acts in defiance of the law, which helped to change the law.

Sailesh Mehta is a leading advocate who has defended and prosecuted in some of the most serious and important cases over the last 30 years. His practice ranges from serious and organised crime to high-profile regulatory cases. He sits as a Recorder of the Crown Court.

It is a shame that some peaceful demonstrations also attract a minority of those who loot, attack and burn and engage in other criminality. They rightly attract the opprobrium of peaceful protestors and the public. They have no place in movements such as BLM, whose leaders have warned against all non-peaceful activity. The toppling of the Colston Statute in Bristol is viewed by many to be a criminal act outside the BLM movement.

In this heady mix of law, politics and morality, millions of marchers across the globe have made individual political decisions to break the law. They should expect arrest and punishment, while hoping that the authorities will turn a blind eye There is, for a very short period of time, a small window of opportunity to acknowledge and address the institutional stain of slavery, segregation, poverty and unequal treatment. In 1964, Martin Luther King wrote a book: “Why We Can’t Wait” when responding to critical voices urging him to slow down. Ironically, black African-Americans were forced to continue their waiting until now.

The protestors have decided not to “quietly submit” to injustice and have taken up Frederick Douglass’ injunction to seek change through agitation. As Professor Howard Zinn has said: “Protest beyond the law is not a departure from democracy; it is absolutely essential to it.” Victims of centuries of inequality have seized the moment and believe that some ideals are worth breaking the law for.  Already, they are seeing the fruits of their action in the USA where policing methods are likely to change radically.

What we are witnessing here and in the USA is the non-adherence to and the non-application of a law. Both decisions are political but made in a legal context. Where there is a disconnect between a clear breach of the law and a moral imperative to peacefully demonstrate, the State can enforce the law or turn a blind eye. Whatever it does will be criticised by a proportion of the public. On this occasion the State has (for now at least) opted to permit the march of history to pass through unimpeded, while Justice sometimes winks. 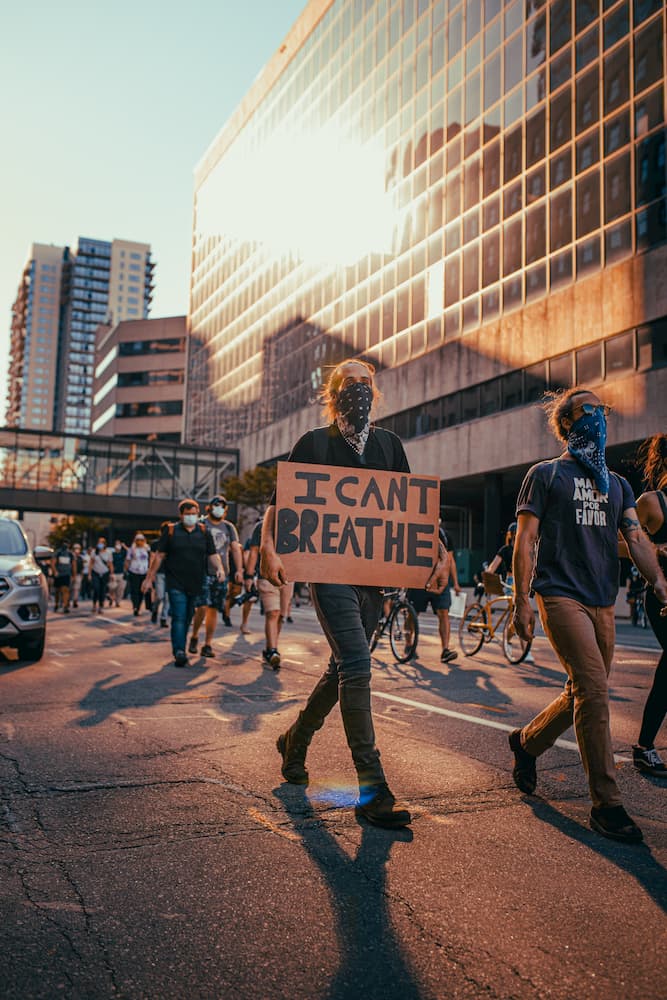